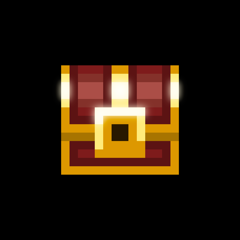 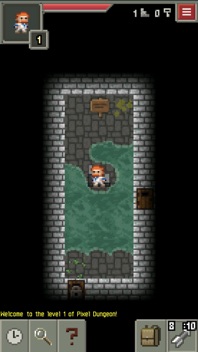 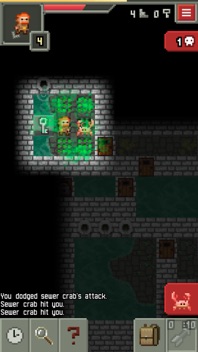 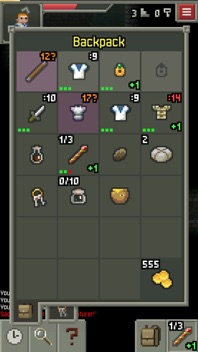 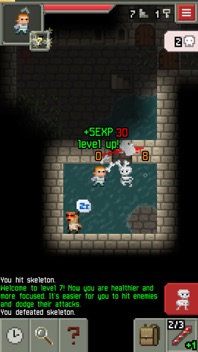 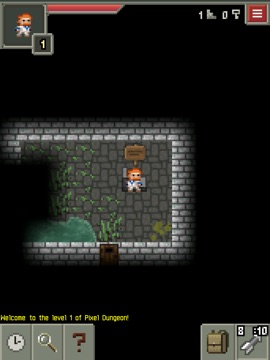 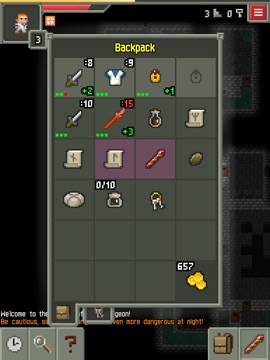 Pixel Dungeon is an exciting and extremely popular roguelike. Explore the depths of Pixel Dungeon, collect useful items and fight fierce monsters to find the Amulet of Yendor (surprise!) - the ultimate artefact of this game world!
Are you prepared for this very easy to play yet difficult to master dungeon crawler?
Features:
* Charming pixel-art graphics and a simple interface that gets out of your way.
* 25 randomly generated levels with different settings like sewers, abandoned prison, caves, etc... so you will feel that every new game is unique!
* A deceitful dungeon full of dangers! Try to avoid the hidden traps or falling on deadly chasms. Or find as many chests as you can, full of treasures to use or sell!
* A different array of monsters that will try to get a piece of you on every corner, plus some bigger bosses that will try to get an even bigger piece ;)
* Lots of different items to find, buy, sell... including armor, weapons, potions, wands, scrolls...
* Various character classes to suit your style of play, from the strong Warrior or the knowledgeable Mage to the sneaky Rogue and the powerful Huntress. You can specialize your character even further, if you survive long enough ;)
* Enchantments that you'll have to use on your weapons and armor if you want to survive the dungeon's harsh conditions
* You'll use your alchemy knowledge to brew rare potions, improve the dungeon's economy by spending all your coins on the shops and deal with obnoxious NPCs and their demanding quests
* Lots of other surprises, you'll need to check the game to find out!
Everything about Pixel Dungeon:
Temple of the Roguelike forum: http://forums.roguetemple.com/index.php?topic=2826
Official facebook page: https://www.facebook.com/pixeldungeon
Developer Blog: http://pixeldungeon.tumblr.com/
Pixel Dungeon Wiki (including things like items and monsters descriptions, tactics and mechanics etc), run by a community: http://pixeldungeon.wikia.com/
You can also follow us on Twitter: https://twitter.com/watawatabou & https://twitter.com/Arcnor

- Improved Catalogus
- Improved tiles
- New Berserker's perk
- Any wand can be merged with another wand of the same type
- Wand Of Flock spawns fewer sheep, but they block line of sight and live longer
- Wand of Avalanche is buffed
- Wand of Firebolt is slightly nerfed
- Sacrificial mark gets propagated on attack
- All mobs on a level get beckoned when someone steps into sacrificial fire
- More "scroll-like" behaviour of Scroll of Wipe Out
- Background music issue fixed
- Some typos fixed
and more..