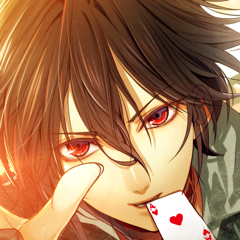 The Premium Edition, which includes all the scenarios, as well as the new one, is available at $22.99. (It costs $21.86 less than buying all the episodes using the Standard Edition)
It is the 1st of August.
Upon awakening, you find yourself without any memories from before August 1st. Everything, from the sort of life you lived to the relationships you had, is a complete blank.
A young boy named Orion appears in front of you, revealing himself to be a spirit attached to your mind. Under Orion's guidance, you begin the struggle to regain your memories...
Blunt ∙ Earnest - Heart -
Shin (VA: Tetsuya Kakihara)
Your childhood friend and current boyfriend. He is only 18 years old, but has a very serious and cold demeanor that frequently causes conflicts with others his age. Oftentimes, he appears aloof and indifferent, but he is actually very affectionate and cares deeply for you. He is a senior in high school, and is currently preparing for university entrance exams. He is also Toma's childhood friend.
Alluring ∙ Fascinating - Spade -
Ikki (VA: Kisho Taniyama)
Ikki has a unique condition that causes women to become enamored with him upon sight. He is 22 years old and is currently enrolled in a nearby university. Having given up on a genuine relationship, he lives the life of a playboy, indulging in the transient pleasures it brings. However, he becomes very close to you after he discovers his “eyes” have no effect on your emotions toward him. Despite his looks and popularity, Ikki is really a kind and sincere man. He is a good friend of Kent’s, a graduate student who attends the same university.
Cool ∙ Logical - Clover -
Kent (VA: Akira Ishida)
A highly intelligent, 25-year-old mathematics graduate student, Kent sees the world from a purely objective point of view. He is normally very confident in his convictions and in the results of his relentless analysis of others; however, it seems as if he is unable to maintain the same composure when he is around you. His tendency to logically dissect every action makes him a difficult companion, especially among females. He is a good friend of Ikki’s, who competes with him in solving overly complex math puzzles.
Affectionate ∙ Intense - Diamond -
Toma (VA: Satoshi Hino)
Toma is a 20-year-old law student at the university you both attend. Being your oldest friend from childhood, he has naturally assumed the role of your big brother. Toma has always kept an eye on you from a close distance, and takes on the responsibility of caring for you after you collapse on the road outside of your apartment. His desire to protect you is extremely strong, to the point that his mental state can become unpredictable... He is also a childhood friend of Shin’s.
Mysterious ∙ Enigmatic - Joker -
Ukyo (VA: Kouki Miyata)
A strange young man who appears unexpectedly. He gives you mysterious warnings, and disappears again without explanation. Whether he wants to protect you or harm you is unclear.
Friend ∙ Protector
Orion (VA: Yumi Igarashi)
A spirit from a distant world. His outward appearance looks to the human eye as a 10-year-old boy. On his way to run a short errand in the human world, he crashes into you and becomes trapped inside your mind. He supports you in order to fulfill your mutual goal of regaining your memories.
- How to Play
After the opening movie, the title screen will be shown. To play a new game, select “NEW GAME.” To continue your current game, select “CONTINUE.” If you’d like to select another story, select “CHAPTER.” After clearing the prologue, four different stories will become available.

1 Bewertung
I could call it an addiction. I almost can't work cause I wanna know what will
happen next. I know that game it a bit expensive. But you have the same fun as with a game on a PS or something like this!
Greets
Drama und Mystery meets Otome - eine gelungene Mischung! Ich bin völlig begeistert und hoffe dass noch weitaus mehr Otome Games den Weg nach Europa und in den iOS App Store schaffen! 😊