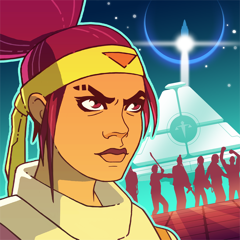 SUMMER SALE!! Play Episode 1 now ahead of Episode 2's release. (The remaining episodes will unlock when they are released at no additional cost.)
A distant planet. A dying colony. A deadly conspiracy.
The mining boom has left New Providence to die, and just one Earthbound ship remains. Survivor Rose stands in defiance of a broken system. Rise up with fast-paced RPG tactics, and battle across vibrant fields of color.
Join the fight in Ticket to Earth, a sci-fi tale of betrayal and insurrection.
~ Indie Prize Finalist, Casual Connect USA 2017
~ Selected for PAX Rising at PAX East 2017
~ Selected for Made With Unity Showcase at Unite Melbourne 2016
"Ticket To Earth is an evolutionary leap forward in the puzzle/RPG hybrid genre." – Kotaku
"All in all this is an original, smart, challenging puzzling RPG that manages to blend its head-scratching and character development in a way I've not seen before. And in doing so becomes one of the first truly essential mobile games of the year." – 9/10 Pocket Gamer
“It’s always a magical experience when a game comes together and hooks you in, which is exactly what Ticket to Earth did for me." – checkpointgaming.net
FEATURES:
ORIGINAL GENRE MASH-UP
Introducing a new style of gameplay that blends puzzle and tactics games. Ticket to Earth is the quick-play, mission-based RPG you’ve been waiting for.
SCI-FI EPISODIC NARRATIVE
Join Rose, Wolf, Doc and Seven as they race across New Providence to stop a criminal conspiracy.
FIGHT FOR JUSTICE
Play as Melee and Ranged Peace Keepers, armed with over one hundred Combat Powers. Fight against a cabal of twisted enemies - desperate criminals, murderous machines and terrifying mutants.
JOIN THE MOVEMENT
The Stellar Consciousness Movement will help you reach your true human potential. Deep RPG character progression - develop your talents and build better heroes!
EPISODE GUIDE:
Ticket to Earth is a gripping RPG narrative delivered over 4 big episodes. Episodes will unlock as they are released at no additional cost. Be the first to play new content by downloading Ticket to Earth now.
Episode One - Uprising (Available now)
Episode Two - Crash (Coming soon)
Episode Three - Meltdown (Coming soon)
Episode Four - Revolution (Coming soon)
For more information about the game, visit www.ticket-to-earth.com
Chat with us on Twitter: @Robot_Circus #TicketToEarth