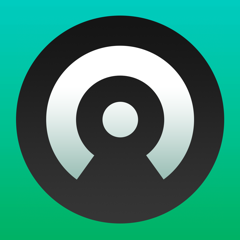 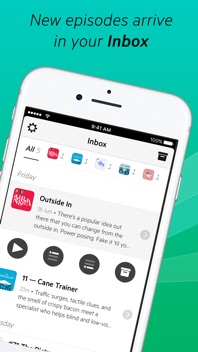 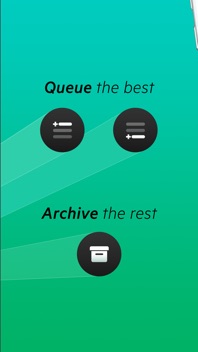 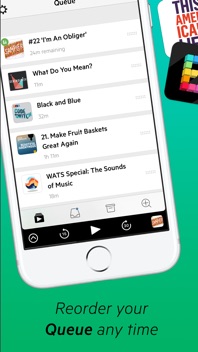 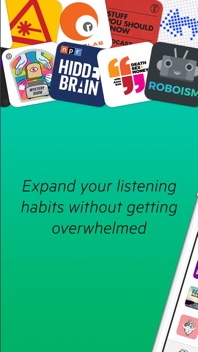 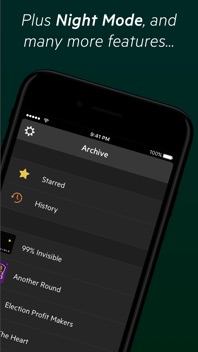 Castro lets you track lots of podcasts at once without getting overwhelmed. Here’s how it works:
1) Newly published episodes land in the INBOX. Read the descriptions, queue the good ones and archive the rest.
2) The QUEUE is a central playlist where you organize your next few hours of listening. Queued episodes are automatically downloaded.
3) Press Play. Castro plays your queue in order from top to bottom. Reorder or archive queued episodes anytime.
4) In the ARCHIVE you can find the back catalogue of all shows you subscribe to, browse your listening history, and easily access your starred episodes
This triage flow lets you expand your listening habits without getting overwhelmed. With Castro, subscribing to a podcast doesn’t mean making a commitment to listen to every episode. You don’t have to choose a few shows and miss out on the rest.
OTHER FEATURES
* Drag and drop support helps you triage and reorder your queue.
* Castro sports an elegant dark mode (requires Castro Plus) and well-thought out sleep timer, offering the best in night time podcast listening.
* Our servers constantly scan for new episodes across every podcast, so your phone doesn’t have to, saving battery life and data usage.
* Queued episodes are automatically downloaded, so you can focus on deciding what you want to hear and let Castro manage the details.
* Beautifully rendered full screen show notes.
* Episode notifications include a short summary of the episode to help you decide if it interests you. You can play, queue or archive the episode directly from the notification without opening the app.
* CarPlay support.
* Watch app to control playback and select another episode from your queue.
* Full play history.
* Star episodes to easily find your favorite episodes later.
CASTRO PLUS
Castro Plus is an optional subscription to unlock a range of advanced features. There are quarterly and yearly payment options, and both include a one week trial.
+ Trim Silence — With this option on, the app will analyze audio as it plays to detect silent parts and accelerate those parts. Get through more episodes faster.
+ Enhance Voices improves the listening experience for many podcasts and makes it easier to hear in loud environments. Under the hood, Enhance Voices applies a dynamic compressor and a peak limiter to increase volume just where it’s needed.
+ Mono-Mix — Mixes a stereo podcast to mono, which makes it easier to hear podcasts that pan some guests on left/right channels.
+ Chapter skipping and selection.
+ Chapter and episode artwork.
+ Episode Limit lets users specify what number of episodes of each podcast to keep.
+ Set a start position for episodes of each podcast.
+ Customize settings per-podcast: Episode Limit, Trim Silence, Enhance Voices, Mono Mix, Skip Intros, Playback Speed.
Castro Plus costs $8.99 per year or $2.99 per quarter. Prices are in US dollars and may vary in countries other than the US.
Castro Plus is charged to your iTunes Account at confirmation of purchase. It will renew on the day before the current subscription period ends. You can cancel auto-renewal any time from the Castro settings screen.
You can switch between the two subscription periods after you pick one, but your trial period will end immediately if you do, so it's best to wait till your free week is over before changing.
Subscription automatically renews unless auto-renew is turned off at least 24-hours before the end of the current period. Your account will be charged for renewal within 24-hours prior to the end of the current period. Subscriptions may be managed by the user and auto-renewal may be turned off by going to the user's Account Settings after purchase. Any unused portion of a free trial period, if offered, will be forfeited when the user purchases a subscription to that publication, where applicable.
Privacy Policy & Terms of Use: http://supertop.co/castro/privacy

We fixed some bugs:
* Fixes issue where automatic backups could fail unless one manual backup was created first.
* Fixes crash when streaming episodes that redirect endlessly.
* Fixes issue where the top episode in the queue could fail to load after a multiple drag and drop.
* Fixes issues where the watch app wouldn’t be updated when a new episode started.
* Castro no longer detects and links phone numbers in show notes.
* Changing the playback rate in the app wouldn’t update CarPlay or the Watch App
* Fixes a bug where CarPlay was not updated when an episode ends and a new one begins.
* Hides keyboard when player screen is opened.
* Fixes issue where opening the same podcast from the charts multiple times could duplicate episodes.
* Fixes a crash that could happen when dropping a lot of episodes on the queue.
* Fixes issue where episodes could stream without confirmation.
* Speeds up initial load time.
* Fixes issue where Castro could fail to resume when interrupting an alarm using AirPods.
* Fixes an issue where a recently queued downloaded episode could ignore the download and stream anyway when played.
* Fixes a number issues where the Now Playing information on the iOS Lock Screen and Control Centre could end up showing incorrect information.
* If an episode is of a file type that requires a full download before it can be played, notify the user if they try to stream it.
* Fixes an issue where Castro would ignore certain types of chapter.
* Next / Previous Track car controls weren’t working (they now skip back / forward by the chosen skip intervals)
* Fixes an issue where scanning past chapter artwork would load for that chapter even if you've already scrubbed past it by time it's ready to show.
* Fixes an issue preventing artwork from appearing for image urls with invalid characters.
* Fixes an issue where Castro would silently fail to play invalid episodes.
* Fixes issue where an incorrect episode could play if there was an error while streaming the top episode.
* Drag and Dropping the now playing episode to the archive now correctly removes it from the player.
* Archiving a currently playing episode doesn't automatically start the next episode anymore unless the continuous play setting is on.
* Queueing an episode to an empty queue now sets it up in the player properly