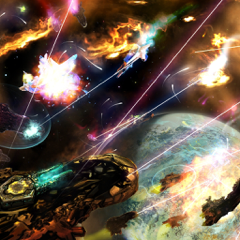 IMPORTANT: Made for the iPad Pro, Air 1+, Mini 2+ & iPhone 6 Plus or newer. Not compatible with older or smaller devices!
"Super hard to put down." 5/5 Gameplay @ MobileTechReview
"An economy that constantly changes truly brings the game alive." - 4/5 @ Pocket Tactics
SUMMARY:
Set in a dynamic open-world sandbox with an evolving conflict between three major splinter groups of humanity, players can freely be merchants, bounty hunters, pirates, miners, smugglers or wanderers.
Your actions or in-actions, big or small carry consequences that are noticed by the inhabitants and factions. Empires will rise and fall, take a side, or sow the seeds of anarchy.
Be immersed in a universe that's alive with random events offering pilots an opportunity for exploitation. Be involved in dynamic economies with logistical supply & demand at the mercy of a capitalistic merchant or a menacing pirate.
Be the catalyst to decide the fate of humanity.
FEATURES:
* Full HD PC top-down space combat & trader sim, refined with intuitive controls & UI for mobiles.
* Squad-RPG progression via skills, perks, ship upgrades & modules.
* Deep trade system with dynamic supply & demand, affected by events, piracy & conflict.
* Fluid real-time combat with tactical pause & a wide variety of weapons.
* Resource gathering & looting of combat kills.
* Dynamic factions will conquer & defend systems with fleet movements. Your actions, big or small, have a major effect on the tide of conquest!
* Random events offer opportunities and also ensure no two game plays out the same.
* Random encounters offer interesting side-quests or tough choices with major consequences.
* Man & take to the sky in Corvettes, Frigates, Cruisers, Capitals and Carriers!
* Clever enemies. Fast & agile ships will flank, large ships will broadside tank with their strong directional shields.
* Take part in epic fleet battles with Capital Ships battling among support ships & hordes of combat drones!
* Intelligent Squad AI, never be caught flying with stupid, ever.
* Challenging, non hand-holding, but fair Rogue-like gameplay.
---------------------------------------------------------
Additional notes:
Please be aware, the game is English only. I am a solo developer with limited resources so supporting multiple languages is currently not possible.
Recommended start: Merchant or Hunter. Pirate is not for newbies, it is very tough with every faction out to kill you on sight!
There's an alternative Flight Control option/toggle in the title menu, bottom right icon, tap for info. It is there to allow more finer flight controls & ship turning on the spot, based on player feedback.
Rogue-like mode is only recommended for expert players. It truly is challenging, however, special Capital Ships are available in this difficulty mode as a bonus.
For queries or feedback, please contact me:
Twitter: @AH_Phan
Email: halfgeekstudios@gmail.com

* Fixed a random crash bug ("local servers already up" / due to music audio streaming) for iOS10!

Keine Bewertung
Plays great on the iPad! I have been searching for a game like this on the app store for ages, oddly never stumbled accross the prequel.
So what is this about? It is your common space sim, you can trade, fight, all in an open world. The interesting part with this game is that the world reacts to what you do - for example if a shipyard planet has a shortage of alloys, it wont offer advanced ships. So, sell them some alloys and there you go.
The combat is well balanced and it is fun to play on the iPad.
Was a big Escape Velocity fan as a kid. Great to be able to play something similar again!
Only downsides: There is no story. there are some sidequests, but thats it. Also, being able to capture ships would be great!
Ein komplexes Handels-Kampf-Weltraumspiel, das sehr komplex ist. Hier geht das Spielkonzept vor Grafik - wie früher. Man möchte immer noch einen Transport absolvieren bevor man Schluss macht. Das Tutorial ist leider schwach, aber Developer ist aktiv im Forum bei toucharcade und hat die ersten Änderungswünsche schon in einem Update umgesetzt! So muss das sein :-)